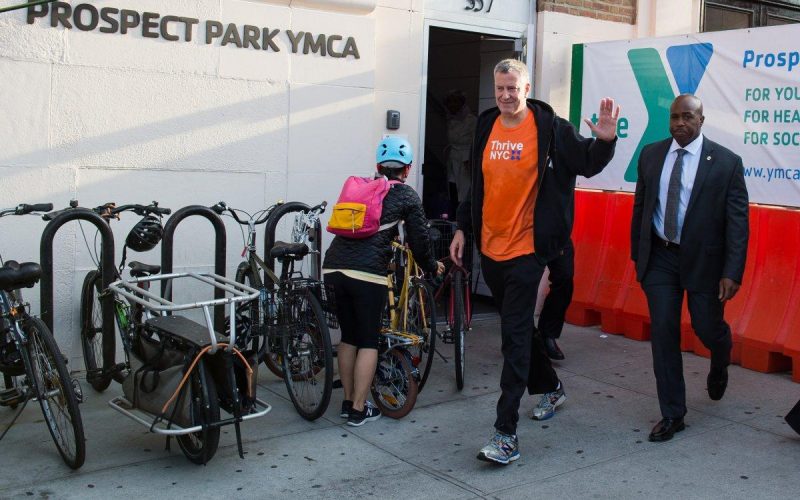 This takes working out to a whole new level.

Mayor de Blasio summoned several top staffers for a Friday morning meeting at his favorite spot in the city — his Brooklyn gym.

De Blasio held a 10:30 a.m. meeting at the Prospect Park YMCA with seven aides — including both his and First Lady Chirlane McCray’s chiefs of staff — on Sept. 23, according to a review of his private schedule.

The meeting was about setting his upcoming schedule and lasted a half an hour.

His press secretary Eric Phillips said it was rare for him to hold a meeting at the Y — which a review of schedules prior to the treadmill summit seemed to back up — and that it is only done “when it makes sense for scheduling and travel purposes.”

De Blasio likes to spend Fridays out of City Hall in his old Park Slope neighborhood, a curious habit that recently raised eyebrows when he used an NYPD helicopter to fly him from Prospect Park to a speech he was giving in Queens during rush hour.

His casual Fridays typically include time at the gym, Colson Patisserie and Bar Toto, though his aides say he is working throughout the day on his phone and through updates.

De Blasio uses Bar Toto, a modestly-priced Italian eatery, as an office away from City Hall, including as a spot to call donors to contribute to his 2017 City Hall campaign.

Fund-raising calls are prohibited from inside City Hall.

On the morning that he made his staffers schlep to Brooklyn, he had no public events other than a radio interview on WNYC.

As he frequently does, he called into the interview from the Park Slope Library, which is right near the gym, the schedule shows.

His rep said that “call time” is blocked off for “all sorts of calls.”

Kenneth Sherrill, professor emeritus of political science at Hunter College, said mayors should try and get out of the bubble that is City Hall, but de Blasio should try and mix it up a bit.

“Getting out of the office and dealing with real people helps a lot … but I wouldn’t go to the same place all the time,” he said.

And dragging your staff to Brooklyn likely won’t make you a popular boss.

“Making the trip takes everyone away from their work for an extended period of time,” he said. “They’ve got go back.”

Previous PostArtists, we have real work to do in Trump’s America

Next PostAdoptable Animal Of The Week: September The Pit Puppy