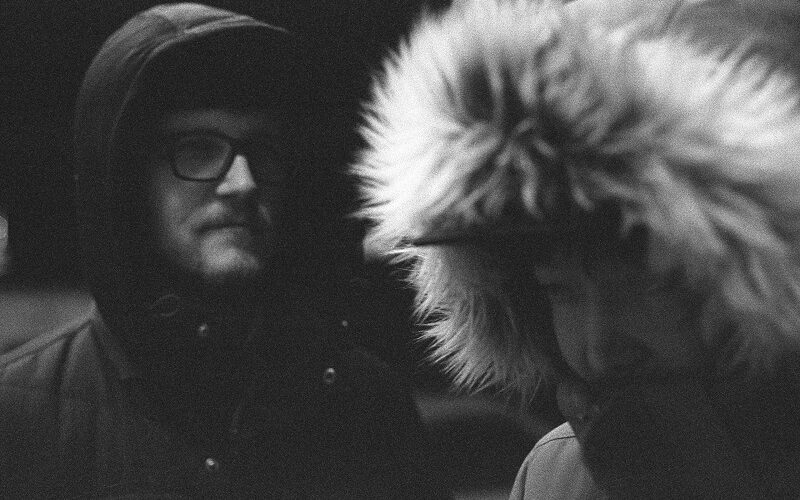 Brooklyn-based Cello and Drum duo Live Footage are no strangers to film. Their improvisational sonic designs have appeared in advertisements, tv shows and documentaries with many of the world’s most recognizable brands (Monster Energy, BMW, HBO, BET, Vice, etc). Consisting of Topu Lyo (cello & effects) and Mike Thies (drums & keyboard), Live Footage holds a residency at NYC Chinatown cocktail bar Apotheke and have toured the United States, Europe, and Asia.

It is no surprise that Live Footage were selected to score jeen-yuhs, the hit Netflix Kanye West trilogy, produced by Coodie Simmons and Chike Ozah. With the aforementioned accolades, and ten studio albums to their name, the experience and body of work was there.  It certainly did not hurt that Topu and Mike had worked with the Simmons/Ozah tandem before.

“Coodie and Chike really allow the people they chose to swim in their own lake. I really appreciate the creative freedom and openness. There were reference pieces, but those were only used to capture an emotion or just lead us in a direction.”

The score for the documentary fits like a glove; evocative, but never overpowering.  Never competing with snippets of Kanye’s music to be in the forefront.  It crescendos gently and steadily with some of Kanye’s greatest triumphs, while becoming eerie and introspective through Ye’s battles with mental health issues.

We had the opportunity to catch up with Mike and Topu to discuss their experience working on jeen-yuhs, and Live Footage’s future plans.

Before we talk about jeen-yuhs, we’d love to know more about Live Footage.  Who are you guys, and what are you about?

LF: We’re a group that encompasses music production in many aspects.  We started out as a classic “band” by writing and releasing albums and touring.  Along the way everyone said we had a “cinematic” sound, so that led to doing other kinds of performances for dance, theatre, and film.  We’ve held a residency every Sunday at a speakeasy in Chinatown called Apotheke since 2010.  Improvisation has always played a big part in our time together, and it heavily influences how we write for different mediums.  We’re always on the search for how to expand our sound, be it through equipment, collaborations, or inspiration from other artists.

How much of your time is spent composing for others vs. making music for yourselves?  Are there differences in the way you work for each?

Mike: When there’s an active project happening, I usually only have time to work on that. Although, no matter how busy we are with something, I find it beneficial to force myself to just make something for myself.  Oftentimes making music with no immediate “goal” ends up getting used in something anyhow.  As far as differences, I’d say the overall approach is generally the same.

Topu: When composing on film scores, we’ve learned how to work in ways that best benefits the project. It becomes something more than about us and we’ve really learned a lot working with directors and editors. Sometimes they’ll place our music in a scene that we didn’t intentionally write for, but it works better than the cue that we had written for it. So, I’d say, working on films feels collaborative and gives a sense of openness to what fits best while letting go of ego. Working for ourselves, I feel like we’re able to go way more left and it doesn’t have to be pleasing to anyone but our personal boundaries of comfort.

How does a film or commercial go about selecting you for a score?  Are you generally reaching out to Music Supervisors, or do they find you?

LF: We’ve been lucky that most people to come to us, but we’ve also been working really hard for that to happen over the past 18 years.  It definitely didn’t happen overnight!

How did you find out you were selected to work on jeen-yuhs?  What was that moment like?

LF: We’ve known Coodie and Chike for quite some time now.  We scored “Muhammad Ali – The People’s Champ” and another short they made, so we were on their radar.  They were regularly coming to Apotheke to chill for a while, and right before the pandemic hit, Coodie hinted at something like jeen-yuhs, and later we found out we were on board.  We were very excited at the prospect and magnitude of this project, but when we started getting the first cues to work on, we nearly had a meltdown every day watching the incredible footage. It felt like a lot of pressure to live up to, but fortunately C&C are really great people to work with.

Director Coodie Simmons comes across as a great guy throughout the trilogy – how was it working with Coodie, and how involved was he in your process?

Mike: Coodie and Chike are truly great guys.  We kind of always thought of them as friends, and we’ve worked a lot before, so we knew it was going to be easy.   Coodie was absolutely involved as far as choosing the right music and such, it’s his 20-year-old passion project after all.  Really the editors were the ones we had the most contact with. Shout to Jason Harper and Max Allman.  They both have such great taste in music, and a great musical ear for edits.

Topu: Coodie and Chike really allow the people they chose to swim in their own lake. I really appreciate the creative freedom and openness. There were reference pieces, but those were only used to capture an emotion or just lead us in a direction. They worked closely with the editors Max and Jason and the whole process was incredibly fun. I think they really “got us” and “understood’ our sonic palette and respected what we do.

Out of the music Live Footage composed for jeen-yuhs, how much actually appeared in the film?

Mike: We probably made over 100 pieces that weren’t used in jeen-yuhs.  That’s great though, they’ll be there for us for something else down the road.  We like to think of it as “using all parts of the buffalo” lol.

Your score is so ambient, open, and light, which provides welcome relief from some of the film’s more jarring moments.  How did you feel about the arrangement when you saw it for the first time?

Mike: They made perfect sense as a juxtaposition to the jarring moments.  From the beginning it was clear that there probably wouldn’t be too much beat based music as to not compete or clash with Kanye’s stuff.

Topu: I felt very proud when seeing it with friends in the theatre. I felt like the conversations that happened immediately after were about the movie and then secondarily we talked about the music and how that helped drive the emotion of a scene or the story we wanted to tell. It was there to be heard but not in your face.

Did you have any direct or indirect contact with Kanye before, during or after the release of the film?

Mike: Not really. We went to a premier in LA and he was there and watched Act 1.  At the afterparty we tried to talk to him, but obviously there was a flood of people doing the same thing.  Topu was sort of next in line to talk to him, but he walked away.

Topu: I was about to say what’s up but to the three people he had talked to before me he was saying like “yo long time no see”, “It’s been so long” … so, when I was next, I was like nah, I’ll wait for another time when it’s not this intimate.

From an invitation to Sundance Film Festival, to the popularity of Jeen-Yuhs on Netflix, this film must have opened up some awesome opportunities for Live Footage.  What’s next?

LF: We’re working on the final touches for an album coming out in a few months with the writer of jeen-yuhs, J Ivy.  We met him through Coodie and Chike at Apotheke in 2019 and he said he wanted to do something together.  So, he flew out from Chicago, and we booked a day at the Bunker studio in Brooklyn and just improvised.  We had very little idea of what he actually did, but it was a magical session for sure.  We were super excited when we learned he got brought on board to write jeen-yuhs.  Otherwise, we have a Cello Quartet album coming out later this year, that we’re collaborating on with an amazing visual artist, Louis Reith.  There’s an “Apotheke Live” album that’s also ready to go for 2023, and we’ve got some other film related projects in the pipeline as well.