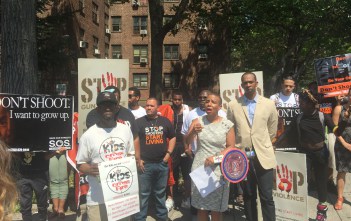 Council Member Laurie Cumbo and Assembly Member Walter T. Mosley took a stand alongside activists at the Whitman Houses following the killing of an unidentified woman last week. Cumbo and Mosley led a press conference at the corner of North Portland Avenue and Myrtle Avenue at 2pm on July 22, where they and other activists talked […]

Next PostTop 10: The best cheap things to do in Brooklyn this week, material world edition