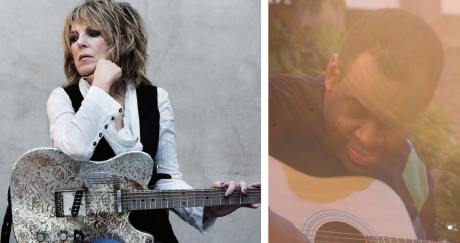 Last year’s Down Where the Spirit Meets the Bone, “a career highlight,” (Pitchfork) solidified LUCINDA WILLIAMS as perhaps America’s greatest barroom storyteller—a singer-songwriter of fierce honesty and conviction, articulate and rough in equal measure. She was born in Louisiana but moved frequently throughout the south as a kid as her father, a literature professor and published poet, took teaching positions at different schools. He introduced her to Delta Blues and Hank Williams; her mother, to Joan Baez and Dylan. She found Leonard Cohen and Joni Mitchell in college. These and other influences coalesced; she began as a folk singer but soon developed a sound that incorporated a wide swath of American roots music. Her records, from her 1979 debut Ramblin, to an early high point with 1984’s Lucinda Williams, and on through a succession of perfectionist gems have, along with live performances of burning intensity, won her a deeply devoted following. It took a while for the general public to catch on, but she’s now revered as an icon—and rightly so. If her knockout show at the Beacon earlier this year is any indication, expect a set that careens from stripped down acoustic ballads to rambling electrified country-blues stomps.

The powerhouse local singer JASON WALKER comes from a multi-generational gospel music family—he was cradled in the arms of Mahalia Jackson as a child. In a career that has taken him through the worlds of rock, gospel, classical, jazz, sacred music, and opera he has shared the stage with Mick Jagger, Bono, Angelique Kidjo, Bernice Johnson Reagon, Macy Gray, Lou Reed, Dr. John and many others. He was a featured soloist and ensemble leader of Robert Wilson and Bernice Johnson Reagon’s Temptations of Saint Anthony and toured with Phillip Glass and Robert Wilson’s Einstein on the Beach. His own music, beautifully captured in his 2008 release Just Like You, is a sublime gospel-infused soul.