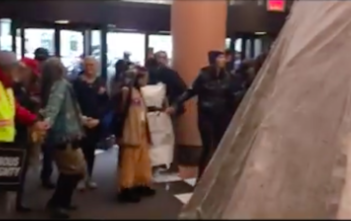 Hillary Clinton’s Brooklyn Heights campaign headquarters made national news yesterday. Saying that they wanted to know her stance on the Dakota Access Pipeline, a group of Native American young people and other environmental activists occupied the lobby of Clinton’s Brooklyn campaign headquarters at 1 Pierrepont Plaza yesterday, Democracy Now and other outlets have reported. The […]