On 4th Anniversary of Sandy, City Says “Substantial Progress” Made On Preparations For Next Storm 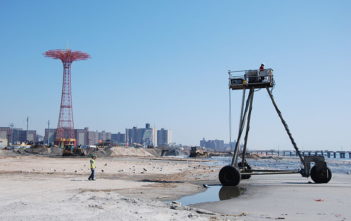 Four years after Superstorm Sandy made landfall in our region, efforts to rebuild destroyed homes, businesses and infrastructure continue, as do preparations for more extreme weather. The October 29th storm caused the deaths of 43 New York City residents and created $19 billion in economic damage in the five boroughs. Sandy had a particularly devastating […]

On 4th Anniversary of Sandy, City Says “Substantial Progress” Made On Preparations For Next Storm : Fort Greene Focus

Previous PostSticky Shoes So-Long: Neighbors Invited To Give Pavilion A Sendoff On November 1