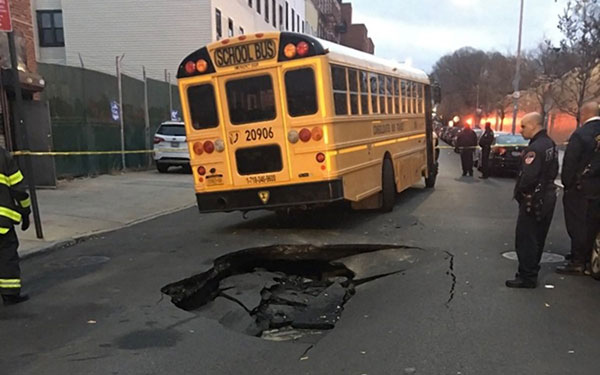 Note: More media content is available for this story at BrooklynDaily.com.

A massive sinkhole nearly swallowed a school bus on 23rd Street between Fifth and Sixth avenues on Dec. 6.

The 7-foot crater opened after the bus drove over the sagging street at roughly 3:30 pm, a witness said. The sight was a shock to block residents, but Sunset Park residents are no strangers to the cave-ins — the chasm is the nabe’s third hulking sinkhole this year. Emergency responders swooped in quickly closing the street and hauling off the stunned bus driver. It was a frightening scene, said one witness.

“It sounded like a bomb went off. Water was gushing everywhere. It was scary. We had no idea what was going on,” said life-long Sunset Parker Jeanine Salerno, who works at a business on the block. “The pressure popped the bus off the street and made it immobile. It was like an explosion. Thank god there weren’t any kids on that bus. I think the driver was okay but he looked pretty shaken up.”

An ambulance arrived on the scene at 3:41 pm and took the driver to Maimonides Medical Center, said a Fire Department spokesman.

A Department of Environmental Protection work crew showed up soon after, pumped water from the hole, and found a busted pipe.

The city couldn’t confirm what caused the cave-in because it is still investigating, but it’s likely due to soil erosion from a leak in either a city water main or a pipe running to one of the neighboring buildings, according to a department spokesman.

“We’re excavating to determine where the leak is,” said rep Eric Landau. “We’re working as fast as we can.”

Locals stopped to gawk at the massive hole and store owners scrambled to find a way to function business as usual. G&W Food Products, a 23rd Street food distributor, had to forklift packages down the block to a truck on Sixth Avenue due to the street closure. And one mother leaving her home with a baby stroller struggled to navigate the piles of debris with her two children in tow.

“It’s a major pain,” said Maria Picciotti. “This happens all the time in this area. God forbid one of my kids was playing out here when this happened. I just want them to get the job done and do it well, but I’m sure this won’t be the last time.”

[BAY RIDGE] Bay Ridge gives back for the holidays 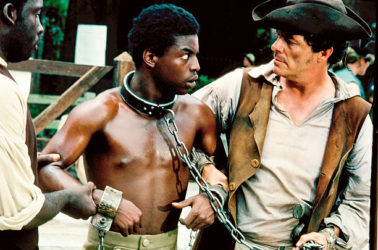 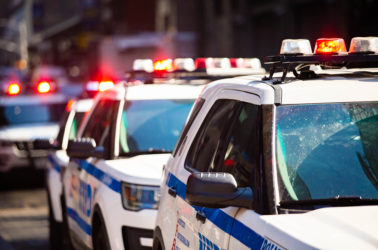 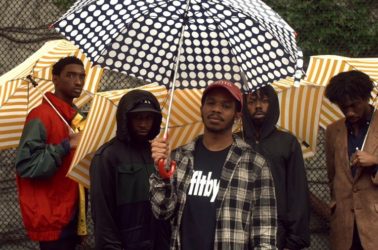