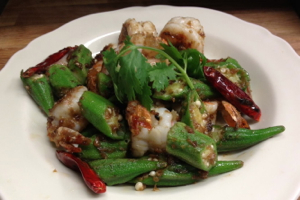 About:
“As a child growing up in Vietnam, I often heard my father recounted stories of his experiences with the Falansai (faa-laan-sai). Father left Chaozhou, a region of southern China during World War II to escape war and famine. Packed on a fishing boat he landed in Vietnam as a teenager. In the early years, he scraped a living transporting catfish from the Mekong Delta to Saigon over the often washed out roads while dodging Falansai checkpoints. Later, he worked as a taxi driver ferrying those who could afford it– which were often the well-to-do Falansai.

For much of my childhood, I’d always imagine that the Falansai was a powerful and fascinating tribe. Only years later did I realize that “falansai” was my father’s phonetic butchering of the word “francais” – the French colonists.

And so there it was, a Chinese in Vietnam badly pronouncing French. Like much of the cross-pollinated culture of Vietnam, the food of Vietnam also reflects this heritage: Vietnamese, Chinese, and French…

Nothing embodies these influences as deliciously as Pho, pronounced Fuh, a soup that starts with the beef and charred onion of the French classic feu au pot, cross it with the clear broth and noodle stable of the Chinese, then finishes with the traditional tastes of Vietnamese ingredients: fish sauce, five spice, Asian basil, bean sprouts, chili, and lime.

At Falansai, we are delighted to bring you the honest flavors of Vietnam and its influences, paired them with selected wines and beers in a fun and casual atmosphere.

We hope to see you soon!

Next PostLoft 87 Condominiums Come to Market