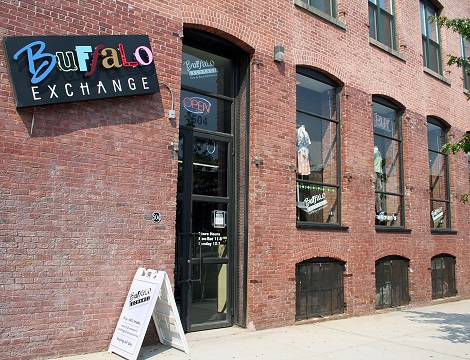 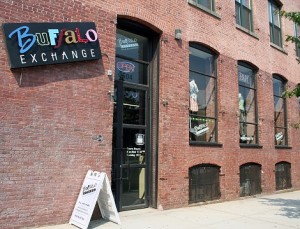 “The first Buffalo Exchange opened in 1974 in Tucson, Arizona by Kerstin and Spencer Block. To our knowledge, this was the very first store that bought, sold, traded and took clothing items and accessories on consignment. Kerstin, being Swedish, thought the word ‘Buffalo’ was very American. And since the store was going to be an ‘Exchange,’ the store’s name was born. The store was in a 450 square foot space that had been an old union office on a side street near the University of Arizona. Kerstin’s love of fashion and thrill in finding a bargain combined to create the company that now has 46 stores and 3 franchises in 17 states, with $81.6 million a year in revenue (as of Dec 2012). Buffalo Exchange is an independent and privately held company and the founders manage the day-to-day business. Kerstin and her daughter Rebecca still own and run Buffalo Exchange out of Tucson.”

The Williamsburg location is extremely cozy and welcoming! I have shopped there plenty of times in search of something different and unique. I have also sold clothing there, which helped me gain some money from the old (but still in tact) clothing that no longer fit my personal taste. They have incredible used sweaters and bags, and the staff are not afraid to engage in conversation with the customers. The saying is true, people. One man’s trash is another man’s treasure!

There are two Brooklyn locations below, feel free to check out both! You never know what you will find!

Next PostGrab A Bite To Eat At Maggie Brown's!