Find The Perfect Bike For Spring At 718 Cyclery! 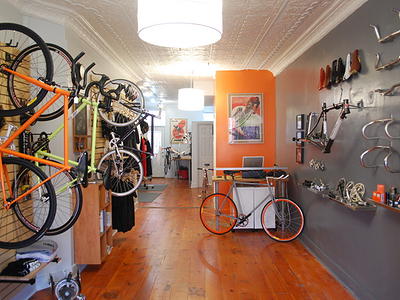 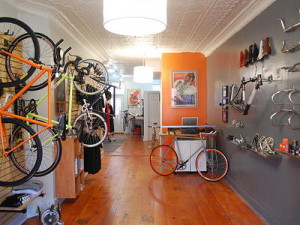 About:
“My history on a bike is one shared by many of us; childhood freedom, exploration, then fitness and transportation. I was a bike messenger in the late 80’s/early 90’s in NYC (for Primetime, and later Meteour, until I got hit by a car on Broadway and 23rd Street). As much as I rode, I shudder to think how little I knew about my bike back then. I got “into” bikes after mine got stolen in 2008.

With great encouragement from my friends at Team Lope in SF, I decided to build a bike to commute to my job as an Architect on Wall Street.

While building in my front yard, my neighbor asked “do you sell those?”
I found that getting hurt and filthy was a great counter-balance to my double-monitor desk job
My wife told me that if I built any more bikes, I would have to get rid of some
The first 2 years in my backyard were a blur. I bought a 10 x 10 metal shed (which Bikesnob christened the “Bike Meth Lab”.

Work commenced day and nigh, through rain and snow. There was an endless parade of people who felt the same way I did about working with one’s hands.

In late 2010, a storefront opened up a mere 1/2 block form my house. we decided that if we were ever going to make this backyard idea into a shop, this would be the chance to do it. The day we moved it, I realized it was too small for the amount of work coming in. In late 2011 we found a great space in Gowanus, which is where we sit today. In 2013 I left my full-time job as an architect to run the shop full time.

I do what I do without arrogance or attitude, and run my shop the way that I would want my family to be treated. In addition to the bike thing, I also teach at Pratt and founded a non-profit that teaches lacrosse to city kids (www.brooklynlacrosse.org). The shop is open full-time, thanks to my good fortune of having the best staff in NYC.

I think that these gigs really round out my teaching/creative/athletic/mechanic life.

Thanks for having a look, it is greatly appreciated”

Next PostGrab Your Favorite Drink At Rustik Tavern