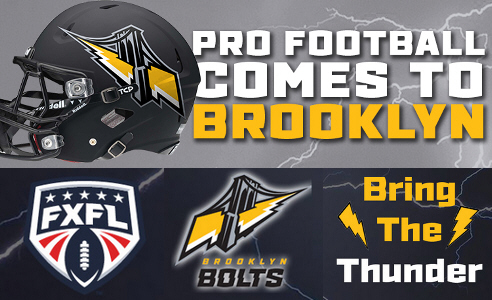 BROOKLYN, NY – Professional football is now in Brooklyn.  We are not talking about arena football.  We are talking about football played the way you watch it on Sundays.  The FXFL – Fall Experimental Football League, intended to be a developmental platform for players, coaches and referees who are on the cusp of fulfilling their NFL dream, will field one of the league’s teams in Brooklyn.

The BROOKLN BOLTS will be playing this year at MCU Park in Coney Island.  The Brooklyn Cyclones will be transforming their incredible baseball field into a full blown football stadium, during the Brooklyn Bolts season.  The season begins October 8th, with the Bolts’ first home game taking place Wednesday October 15th.  Besides the Brooklyn franchise, the FXFL has franchises in Miami, Omaha and Boston.

Rosters consist of recent college grads and NFL players that made it to the final weeks of training camp.  These are the players that are truly on the cusp of landing with an NFL team.

Games will be televised and played on weeknights to avoid scheduling conflicts with the NFL and collegiate football.  MCU stadium has great seating available, as well as suites.

The three Bolts home games scheduled to be played at MCU Park will be on Wednesday, October 15th, Friday, October 24th and Friday, November 7th.