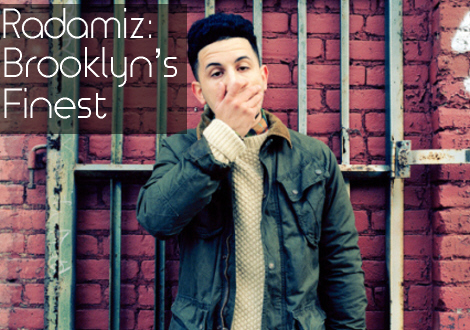 If you have been keeping up with the underground, indie hip-hop scene in Brooklyn, New York, then I am sure you have heard of Radamiz. With his preppy attire and easy going demeanor, at first glance you would have thought that he was a fashion stylist. He is one of the biggest examples that go along with the phrase “don’t judge a book by it’s cover”.

Residing in the Bed-Stuy area of Brooklyn, Radamiz works, goes to school full-time (NYU, to be exact), and pursues his music career. He writes all of his material, and from being in the studio with him, I see that he takes his craft very seriously. He is not one of those “rappers” that rap but have a regular 9-5 career goal. He makes music with the mindset of getting into the industry and staying there for the majority of his working life.

His musical influences range from Theophilus London to The Smiths, and his lyrical content can either ease your mind or make you excited to go out there and pursue your dreams. I have had the opportunity to direct a music video for him along with Chimp for his song “$100,000”, which speaks about his hope for his future and his appreciation for every day that he is granted to live, love, and pursue his dreams.

Below is his website and his soundcloud page where you can check out his latest music!

Wishing you all the best,

Next PostAnthony J. Thomas is "TheBedStuyDandy" And So Much More...