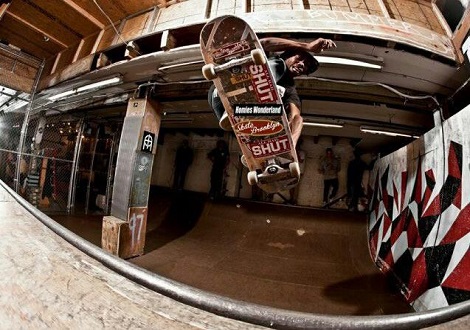 It is rare to find a serious skate boarder that also indulges and succeeds in music. Nelson Darden does both, and he humbly resides in Fort Greene, Brooklyn.  Around his neighborhood people call him Loui D, and if you didn’t know him to begin with, just seeing him around his neighborhood you would know that he is a well mannered and respected young man.  With his many dreams and being a spiritual being, Nelson always has hope and a smile on his face. Nelson has recently been sponsored by skate company SHUT, and will be making a huge name for himself in the skate world any time soon.

Below is my interview with Nelson, enjoy and check him out at the flagship SHUT store in NYC!

*At what age did you start writing songs? Did you have anyone supporting your music from the start, or did you keep it a secret?*

I started writing songs at the age of 12. I kept it a big secret until I performed for the first time in a talent show at 16 in front of my mom, little cousin, and aunt.

*How many mixtapes/EP’s have you released? Do you have one coming out soon?*

I’ve released two mixtapes, the first one of course being “Lyrical Vibes”. The second mixtape I released was under the alias  named “BakedFace” called “The Baked Face Tape”. I’m currently working on “Lyrical Vibes 2” which was set to be released this year 2013, but I think I should begin the year off right in 2014 with the release of part 2.

*What topics do you touch upon in your lyrics?*

I touch on topics such as past experiences, life lessons, learning curves and basically whatever comes to mind most of the time.

*How did you get into skateboarding?*

I first got into skateboarding through playing Tony Hawk games such as all the pro skater ones, Underground, and Project 8 growing up, but growing up in Fort Greene projects, I didn’t know of any way to get a skateboard or how to start. One day my good friend Anthony had his skateboard and he basically showed me that skateboarders and skate shops do exist in Brooklyn, so as soon as I learned how to Ollie with a “kryptonics” board that I got from my friend Nathan, I took it to the next level.

*How active did you have to be in the skate community to get noticed by SHUT?*

Definitely proactive. Me getting noticed by SHUT happened naturally. With six years of constant skating, accumulating a wide variety of tricks, showing my face at every skateboard event, and competing being the best I can be, I would say just having fun and learning as I grow with it. I caught the attention of locals, which led me into meeting Michael Cohen who supports my skating and connected me with the SHUT family. I’m truly humbled for the opportunity to be a part of the SHUT family and currently being employed at the SHUT flagship store in Manhattan 158 Orchard st.

*What are your goals with both music and skating?*

My goals with music and skating may sound vague and far fetched, but I want to reach “GOD like levels”;  basically reaching the highest level within my potential while moving with positivity and expanding with unity, if I am made in His image right.

*Where can people keep up with your progress?*

“My mission as an artist is to continue to create with the intention of synchronizing my abilities and attributes with the further growth of the human race from my very own perspective showing everyone that if I can do what ever I feel like doing, moving with positive intentions,  love ,and light, then so can you.”

Previous PostThe Next Artist To Surface The Air: Kay Anthony