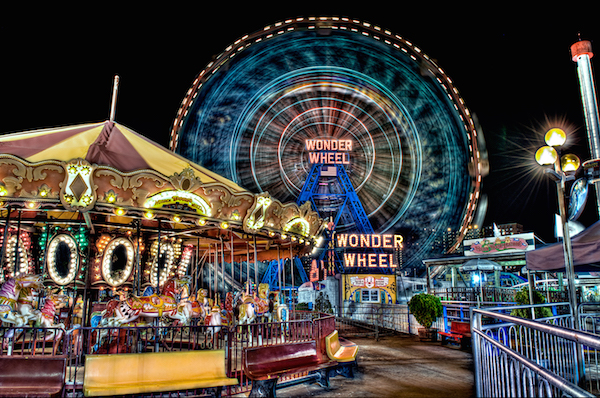 Some places on this list are classics, and some are becoming new favorites. Which ones have you been to? Which are your faves?

This mile-long marvel first opened in 1883 and was the first structure to cross the East River. It was also the longest suspension bridge at the time. www.nyc.gov/html/dot/html/…/brooklyn-bridge.shtml

This amusement park is most famous for its Cyclone roller coaster, which debuted in 1927. It’s also famous for the original Nathan’s Famous, where you can get hot dogs and some beer. The legendary beach there is also home to the New York Aquarium (another great attraction!). http://www.coneyisland.com/

With more than 1.5 million paintings, sculptures and artifacts in its collection, it’s NYC’s second-largest art museum. Right next door to the Brooklyn Botanic Garden, you can knock out 2 great attractions in one day! www.brooklynmuseum.org/

Among the most historic of Brooklyn attractions, the Old Stone House played a role in the American Revolution and, over a century later, served as the Brooklyn Dodgers’ first clubhouse. The original house was destroyed in 1897, but this was reconstructed (with some of the original materials) in 1933. www.theoldstonehouse.org/

Located in a former military residence on the grounds of the Brooklyn Navy Yard, this small museum chronicles the mighty history of the former shipbuilding center—which, at its peak during World War II, employed close to 70,000 people. Permanent exhibits examine the yard’s origins and significance throughout history; for example, a number of massive vessels, including the Civil War ironclad USS Monitor and the Pearl Harbor casualty USS Arizona, were built at the Navy Yard. The location includes a café, weekend bus tours ($18–$30) and an 8,000-square-foot exhibition space. A free weekend shuttle departs from Jay St at Willoughby St every 15–20 minutes.

Brooklyn’s oldest public building was once the borough’s City Hall, a jail, and a court! There are plenty of remnants of the building’s previous functions as a court and jail: defunct holding cells, caucus rooms, and most impressively, a magnificent courtroom that’s now used as an event space and a set on shows like Law & Order. Free guided tours are offered on Tuesdays at 1 p.m.

Opened in 1976 in a former IND subway station, the museum displays historic artifacts—including a collection of vintage train cars spanning the 20th century—as well as more timely pieces, such as works from the MTA’s Arts for Transit program. www.mta.info/museum

Next PostTry The Oysters At Maison Premiere